The infamous Vegemite is an Australian food-spread made from leftover brewer´s yeast extract. It was developed by Cyril Callister in Melbourne in the early 1920s and is produced by the Australian food company Bega Cheese.

Vegemite is typically eaten smeared on bread and is also a popular filling for pastries.

In Australia, competing food producers have launched brands such as Promite (created by Henry Lewis & Company in the 1950s), MightyMite (from Three Threes Condiments), OzEmite (from Dick Smith Foods), and AussieMite (created by Roger Ramsey in 2001). 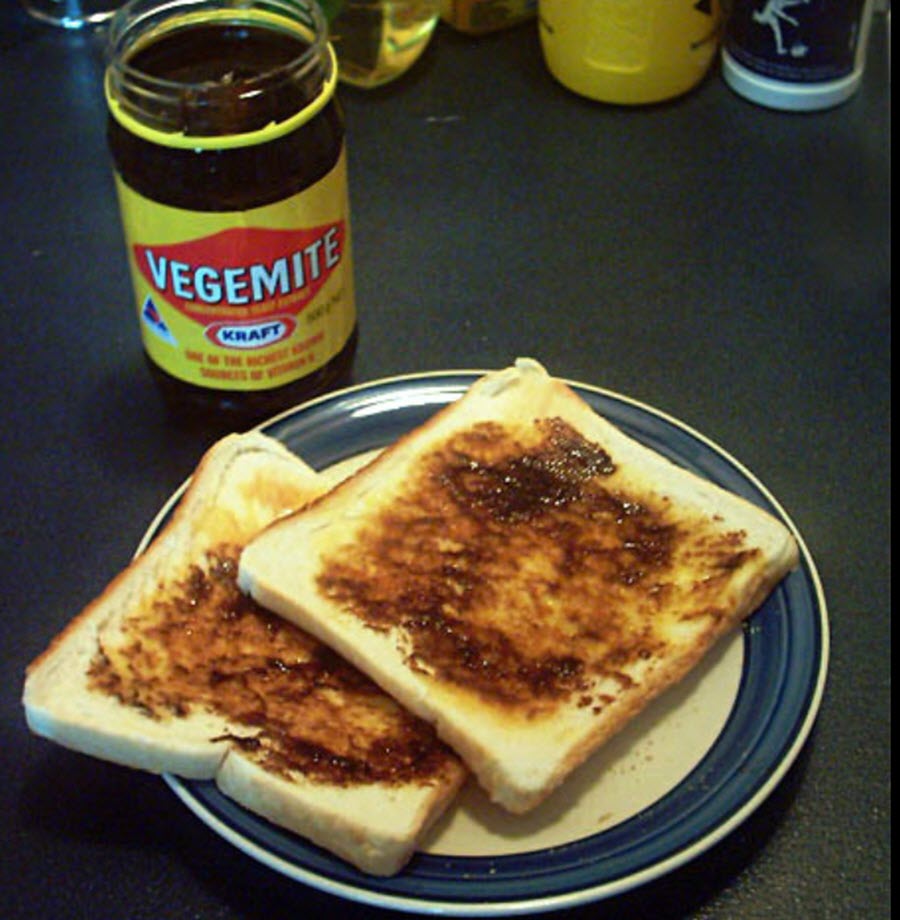 Vegemite is produced from brewer´s yeast extract, vegetables and spice additives. It tastes salty, malty and slightly bitter. It is rich in glutamates, which gives is a pronounced umami flavour which some describe as being reminiscent of beef bouillon.

In the early 20th century Australia, consumers adhering to British food culture were used to buying imported Marmite from the United Kingdom. Marmite is a food spread based on yeast extract, invented by the German scientist Justus von Liebig. During World War I, the import of foods from the UK was disrupted. After the war, the Australian company Fred Walker & Co. decided to develop a similar product based on used yeast from breweries, and they gave the task to Cyril Callister.

Callister got yeast waste from the Carlton & United brewery and utilized autolysis to break down the yeast cells. The result was a clear liquid extract, which he concentrated and blended with salt, celery extract and onion extract to make a sticky dark paste.

A naming competition was held, and Sheilah Walker – the daughter of chairman Fred Walker – selected the name Vegemite, which was registered as a trademark in Australia in 1919.

Vegemite was launched in 1923, accompanied with an advertising campaign that emphasised that its was good for the health if children. (It is very rich in several B-vitamins.)

Initially, the product did not sell well, partly due to consumers sticking with the imported British Marmite. In 1935, the company began to use the popularity of the processed cheese Kraft Walker Cheese to entice buyers to try the Vegemite. For a total of two years, you would get free (coupon redemption) Vegemite when buying Kraft Walker cheese products .

In the late 1930s, Vegemite was also being promoted through poetry competitions where imported American Pontiac cars could be won.

In 1939, Vegemite was officially endorsed by the British Medical Association as a rich source of B-vitamins.

By the late 1940s, Vegemite was being consumed in nine out of ten Australia homes. It had been rationed during World War II, but included in Australian Army rations.