Australian Magic is a slot machine inspired by the aboriginal traditions of Australia. The two main characters in this game are the aboriginal man and woman, and they are accompanied by animals that are of special significance in the aboriginal culture, such as platypus, kangaroo, koala, and sea turtle. Uluru (Ayers Rock) is a scatter symbol.

Australian Magic is a highly volatile slot – not for the fainth of heart! 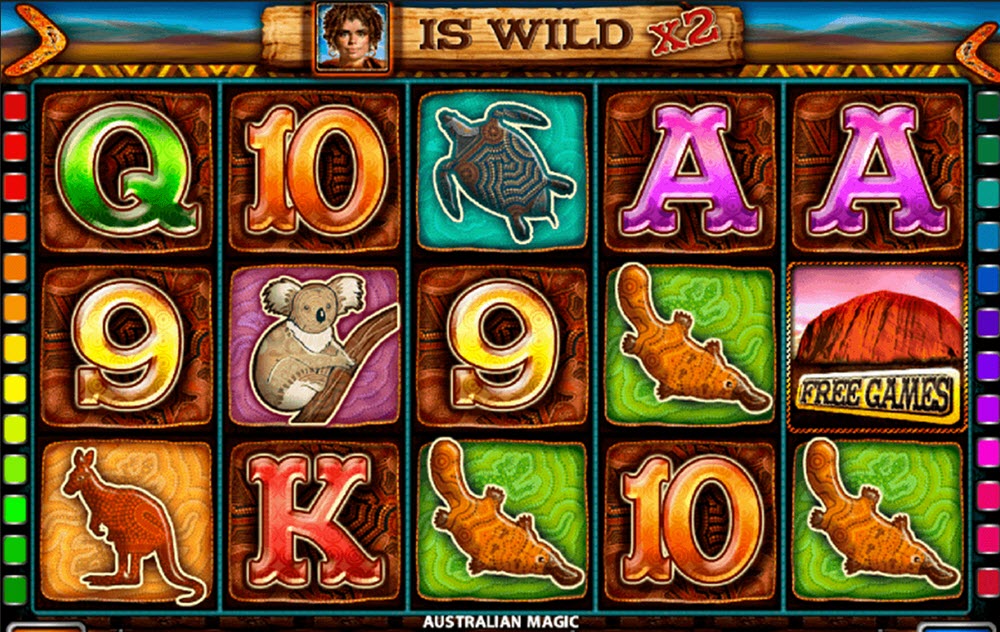 The slot Australian Magic was created by the game developer Casino Technology.

The backgrounds are inspired by aboriginal art work.

You can only wager 1 coin per payline.

The aboriginal woman is a wild symbol in Australian Magic. This wild symbol can substitute for any of the regular symbols, but not for the scatter, and it can only appear on reel #4 and #5.

When this wild symbol helps you form a winning combination, a 2x win multiplier is applied, which means that your win is doubled. If two wilds are included in the combo, the win is multiplied by 4.

The aboriginal man is also a wild symbol in this game, and he can substitute for any of the regular symbols but not for the aboriginal woman or the scatter.

The large redish sandstone rock formation named Uluru (Ayers Rock) is used as a scatter symbol in this game. It can only appear on the third, fourth and fifth reel – never on reel #1 or #2. If you get at least three scatter symbols you will be awarded with 15 free spins. During free spins, a 2x win multiplier applies.

Uluru is sacred to the Pitjantjatjara Anangu, the aboriginal people of the area. The rock is located in the Northern Territory, roughly 335 km south-west of the town Alice Springs. The area around Uluru is famous for its many springs and waterholes. There are also plenty of rock caves here, and many of them feature ancient aboriginal paintings. Uluru is included in the UNESCO World Heritage list, and protected as a part of the Uluru-Kata Tjuta National Park.